An amazing discovery beyond our window on January 15, 2020!

The elusive North Atlantic right whale (Eubalaena glacialis, which means “good, or true, whale of the ice”), one of the most endangered marine animals on the planet, swam right past our current abode in South Nags Head, North Carolina!

Once found in abundance, these magnificent creatures were hunted to the brink of extinction, and sadly, due to a number of factors—including water and noise pollution, entanglements, collisions with ships, and falling birth rates—their populations are desperately struggling to recover; by some estimates, there are only about four hundred North Atlantic right whales left on Earth.

On the entire planet!

Not only is this tragic, it also underscores just how astounding it is that this gorgeous creature—a member of a species that can grow as long as a school bus, weigh up to seventy tons, and live close to one hundred years—swam right before our eyes in its natural environment, surrounded by playful dolphins, heading south to warmer waters.

Because North Atlantic right whales are so incredibly rare, marine and wildlife conservation organizations collect and analyze information about sightings to further inform their efforts. When we contacted the Northeast Fisheries Science Center and the North Atlantic Right Whale Conservation Program about our sighting and shared our photographs, representatives from both agencies immediately and very excitedly confirmed that it was indeed this exceptionally endangered creature. Within just a few hours, our sighting was cataloged into the NOAA Right Whale Sighting Advisory System website, which provides detailed information about migratory patterns and confirmed accounts of these beautiful mammals’ whereabouts.

Based upon the photographs we took from our balcony vantage point and offered to conservationists, this right whale was identified by the unique callosities on his face—and as luck would have it, he has a well-documented history. According to representatives from the Northeast Right Whale Survey with NOAA Fisheries, he is a fourteen-year-old male named Salem, born off the coast of Florida in January 2006 to a mama whale named Silt (or “Miss Silt,” down here in the South, ha ha).

We now know from further researching the North Atlantic Right Whale Catalog—which compiles aerial photographs, field notes, and other documentation of the whales—that Salem traveled from his birthplace in Florida all the way to the Bay of Fundy (where he was repeatedly sighted between August and November 2006) and then back to Florida by December in his first year alone! Over the years, while frequenting his Florida birthplace and the Bay of Fundy, he has also been repeatedly sighted in Cape Cod Bay,  Massachusetts Bay, the Great South Channel, Jeffrey’s Ledge, the Gulf of Maine, the Gulf of St. Lawrence,  and off the coast of Georgia. The distance between the Gulf of St. Lawrence and the coast of Florida is approximately two thousand miles!

The following entries in the field notes for the Center for Coastal Studies further illustrate Salem’s travels and behaviors:

February 27, 2018: Salem’s first sighting in Cape Cod Bay was when he was a yearling in 2007, and since then has been seen here every year since with the exception of 2013!

March 12, 2018: This time he was indulging in unique behavior. He was continuously swimming on his side, slapping his pectoral flipper on the surface of the water and blowing bubbles under water. Such behavior is more common from humpbacks but getting to see some variation to the usual feeding behaviors seen in Cape Cod Bay was a treat. (See a Center for Coastal Studies’ aerial photo of his above-described behavior here.)

Salem has a friend named Fiddle with whom he sometimes pals around.

January 26, 2019: We were excited to identify the two individual right whales as EgNo 3617, Salem, and EgNo 1121, Fiddle. These are both mature males that often return to Cape Cod Bay to feed in the winter.

February 3, 2019: We kept our eyes peeled and ended up finding 3 other whales near him. Of these other three animals were Mantis, Tripelago’s 2017 calf, and Salem.

May 8, 2019: We found 13 right whales including #1204 and her calf, many juvenile animals that we have been seeing consistently over the past few weeks, and #3617 “Salem,” an adult male who we have not seen in Cape Cod Bay in a month.

For aerial photos of Salem, taken by wildlife conservationists and as provided via the North Atlantic Right Whale Catalog, please click here.

Did you know that whales capture carbon and thus limit the accumulation of greenhouse gases? Protecting whales protects the earth, which protects all of us!

We are passionate about environmental conservation, sustainable living, and responsible guardianship of the natural world. Please consider learning more about safeguarding our planet.

Gili, our goodwill ambassador, has a message for everyone today:

Summer haircuts. They’re not my favorite! My wonderfully soft fur that everyone tells me is so fabulous and adorable is mercilessly mowed down by ravenous clippers. What is underneath? A little worm? I am unrecognizable!

I shared these sentiments with my dear friend Miss Stephanie, whom I count among my long list of admirers, and she said something really helpful and insightful:

“Mr. Gili, please understand your beauty and worth are not in your luxurious fur but in your sweet soul.”

Miss Stephanie is right, of course, and not just about me, goodwill ambassador for ScriptAcuity Studio, but about everyone. Let us all try to remember to truly see one another. What is underneath the exteriors of those you meet?

We all share this planet, and we are all trying to live a happy life. We make it easier for ourselves and one another to do so when we offer kindness first.

Let me know what you think. E-mail me at gili@scriptacuity.com. 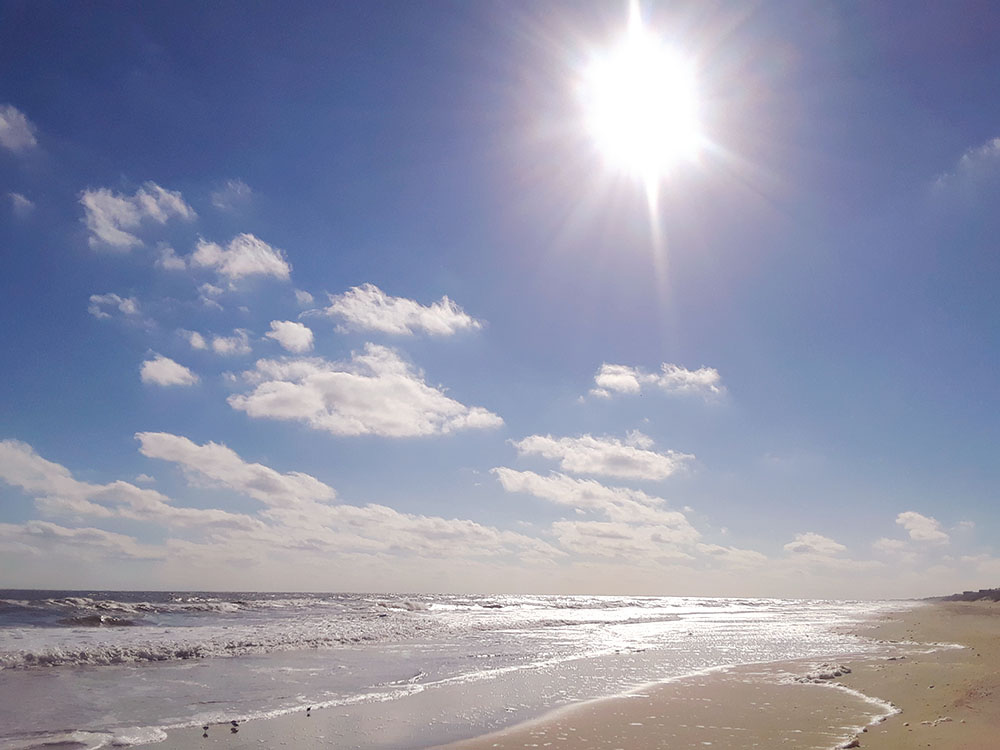 We are all in for a treat this year—in addition to the winter solstice, the moon will be very nearly full—a confluence that, according to many sources, will not happen again until 2094—and the Ursid meteor shower is expected to simultaneously dazzle overhead. For many who love the night sky, it is inspiring and feels rather magical. 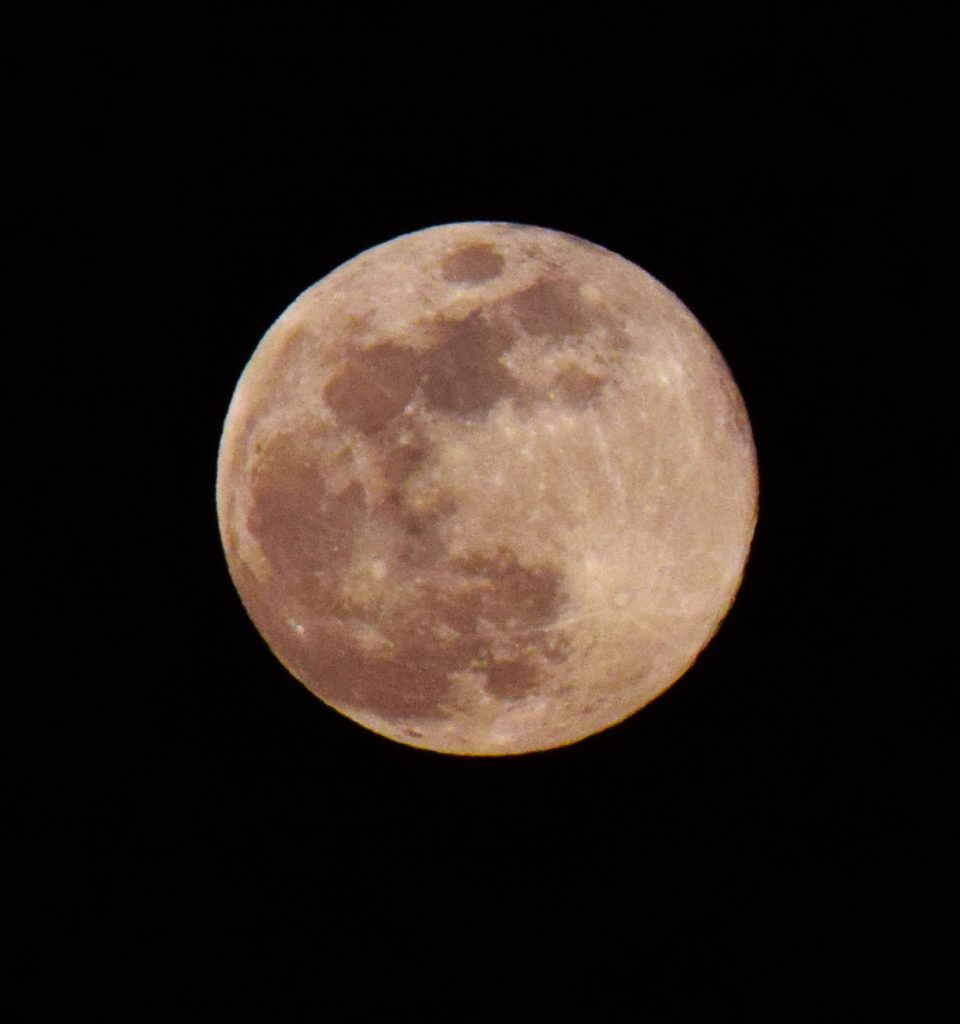 As we have noted in the past, solstices possess a unifying characteristic—everyone in the world experiences them more or less simultaneously, and they connect us with the celebratory traditions of countless cultures around the world. Perhaps consider borrowing one to welcome the lengthening days  … or simply sip some cocoa, toast your toes by a cozy fire, and rejoice in the start of the return to the light.

And, as a special treat, for our readers who celebrate Christmas, Gili, our goodwill ambassador, sends his special love and holiday greetings!

(Gili loves fan mail and always happily responds; he invites you to e-mail him at gili@scriptacuity.com!) 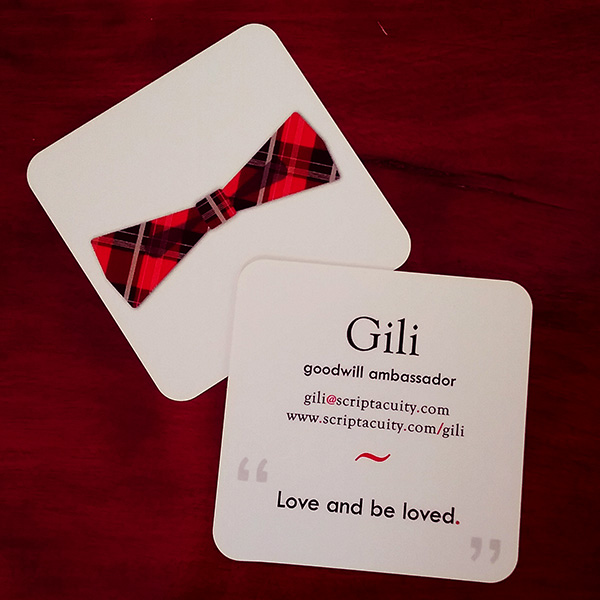 Gili’s first official week as our card-carrying goodwill ambassador has been quite a success. Prior to this week, he’s had a good go at meeting and greeting the many diverse people of the Charlottesville area. In addition to handing out a handful of his cards, he’s also stopped for several photo opportunities, including with Kim at Thistle Gate Vineyard:

Gili is looking forward to exploring many new places and revisiting some of his favorite haunts to share more of what we refer to as Gili’s Plan: “Love and be loved.”

We have an exciting and important announcement.

Gili has officially joined the ScriptAcuity Studio team as our goodwill ambassador.

It is an important role, and he takes his work very seriously. He steadfastly champions our mission of creating excellent work in a positive, productive, efficient, and healthy environment, and he regularly reminds us of the importance of a meaningful work-life balance.

Additionally, his work extends beyond our office to the world around him as he travels with us and encounters others in need of goodwill. His diligent efforts add immeasurable value both to those he meets and to ScriptAcuity Studio.

Please join us in welcoming him to his important new position. Gili invites you to reach out to him at gili@scriptacuity.com. 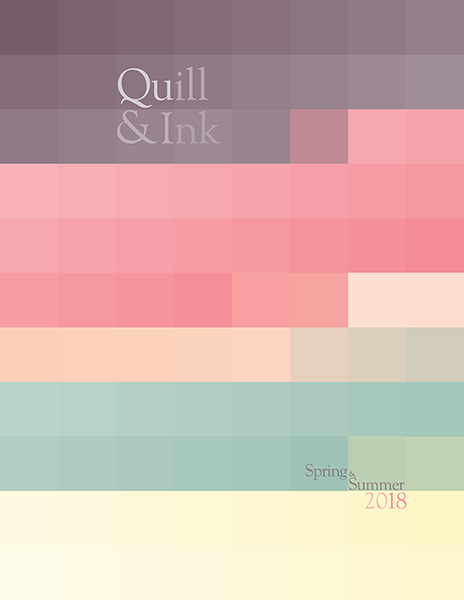